The southern archipelago is getting more international recognition for its beauty and history.

Last month, New York-based Travel + Leisure included Con Dao on a list of the best secret islands on Earth. In 2016, the islands made the Lonely Planet‘s list of top 10 must-see places in Asia.

“Once a penal colony known as the Devil’s Island of French Indochina, this 16-island archipelago off the Mekong Delta has turned to more peaceful pursuits in modern times,” CNN said.

They can pay a visit to Con Dao Prison where French colonists jailed Vietnamese soldiers during the 19th century or hire a motorcycle to tour the islands, CNN said. 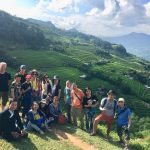